Lauren’s Celebration of Life was a very touching event on February 22, 2014. There were somewhere around 500-600 people in attendance, with people from all areas of her life. Some people read her blog or heard her on the radio and felt compelled to attend, although they had never met her in person. As parents, her dad and I were extremely touched that Lauren had such an effect on so many people. Lauren wanted people to know that cancer happens to young people and her message certainly got out.

Laguna Creek High School was instrumental in converting the gym and multipurpose room into warm, inviting rooms. The principal, Doug Craig, and activities director, Jerry Haynes, were on site since the early morning until everything was taken down in the afternoon. The ASB set up all the chairs and tables and the LCHS swim team handed out the programs and memory pages for guests to note memories of Lauren. Lauren’s cousin, Leslie Kavasch, designed the program and my bosses, Chris and Valerie Rhodes supplied the printing. As the celebration was about to begin, the ROTC came in with the flags to present the colors. This was the wonderful idea of one of the members, who had wrestled with Lauren and is now a senior at the school. The high school choir sang some beautiful songs during the service, including a touching version of “Tears in Heaven.”

There was an opening slide show that is attached to this post and is also available on YouTube that Lauren’s uncle, Kent Kavasch made. The “babysit” co-op was in full attendance at the service, with Steve McKibben leading the prayers and Howard Davis speaking about the co-op and memories of Lauren growing up. One of Lauren’s teachers, Eric Johnson, spoke about having Lauren as a student. Next was one of her high school swim coaches, Brenda Smart. Brenda touched on Lauren’s stubborn nature and how, once she trusted you, she trusted you completely.

Egor spoke about how Lauren had affected his life and how important their friendship was. It was so emotional to see his pain and obvious love for Lauren. They were true “best friends forever.” There was a short tribute video that I found on YouTube that we didn’t know had been made. It turns out it was made by a previous classmate from high school. The clip has also been attached to this post. Lauren’s aunt, Catherine Kavasch, spoke about Lauren’s desire to get more awareness of childhood cancer and how she wanted research funded, if not for her, for other kids yet to be diagnosed.

The celebration ended with the wedding video. If anyone has missed watching the video, it is on her blog that she posted October 22nd. Be warned, you will need Kleenex while watching. It was important to show the video because at the end Lauren thanks everyone for their support. She was truly thankful to everyone who wrote kind words, sent her cards, or gave her unique experiences. She felt her life had purpose when so many followed her blog and sent messages of support.

Following the wedding video, guests were invited to the multipurpose room for some food and drinks. The food was really good and was provided by Plaza del Sol in Elk Grove. The owner and his wife helped serve the food during the entire reception. Around the perimeter of the room were beautiful tables that had mementos from Lauren’s many activities. There were six tables that represented the co-op, high school, swim, other sports, Kaiser, and the wedding. They were beautifully set up, just like a high-end store or museum. 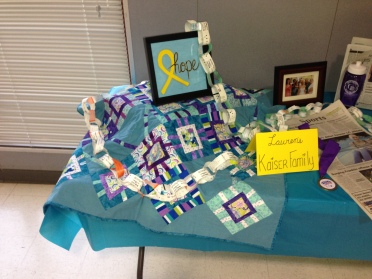 The babysit co-op made the entire celebration possible. They came over and helped put the table items together days before the service, arranged for the flowers, supplied the desserts, and set up the multipurpose room so beautifully. In addition, they had set up a beach chair, palm tree, and a water-looking backdrop at the front of the gym. It was so Lauren! We are truly blessed to be surrounded by such caring people who truly loved Lauren as their own. 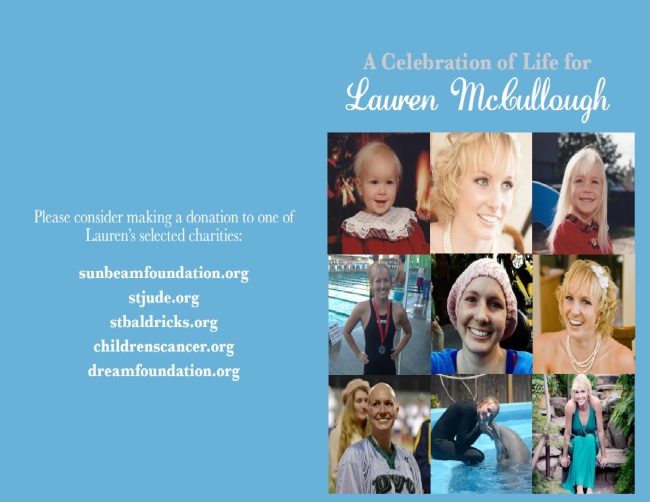 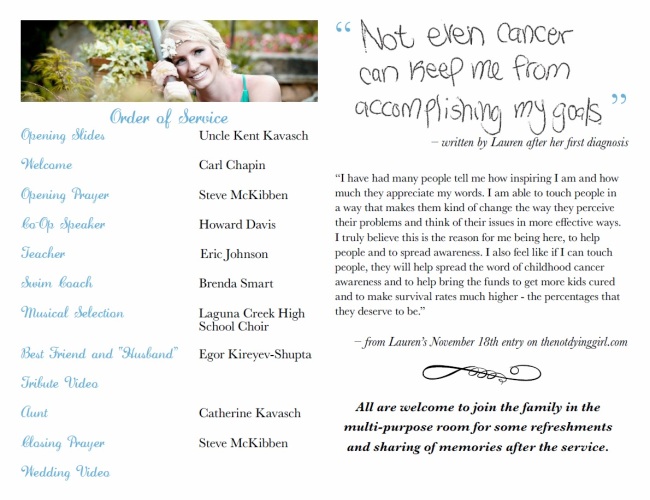 Since the service, there have been many people helping to keep Lauren’s message out there. KCRA did a follow-up story and I was interviewed by Beth Ruyak at Capital Public Radio. It’s still amazing how Lauren made such an impact on the people at KCRA and Capital Public Radio. I hope they realize the impact they made on Lauren.

There was a St. Baldrick’s event in Sacramento on March 10th. Steve McKibben shaved his head for Lauren, including another 20 more on Team Lauren. As a team, they raised over $5500 for childhood cancer research. Overall, the event had 259 participants who raised a total of $143,646. That will certainly make a difference to children diagnosed with cancer! In addition to Team Lauren, one of Lauren’s oncology family, Eden Melgoza, had a personal participant. Eden’s six year old brother, Mason, decided to get his head shaved in honor of Eden and in memory of Andrew Rundle and Lauren. He raised over $1200 in one weekend. What a big heart he has!  Travis Air Force Serviceman, Rob, showed up for the event and participated too.  He followed Lauren’s blog and visited her in the hospital in January so he could meet her. 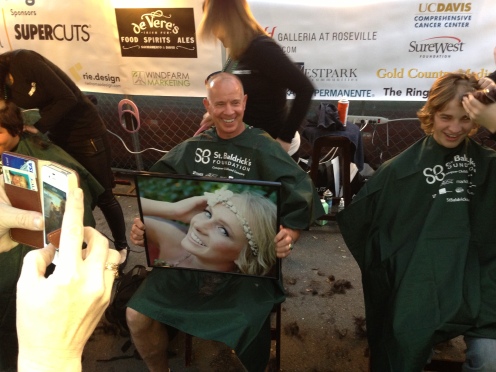 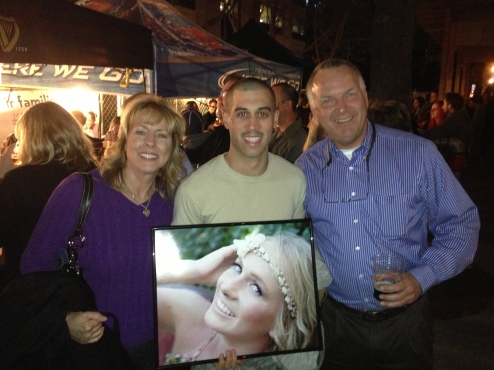 There will be an Elk Grove St. Baldrick’s event on April 22nd from 4:00 – 8:00 at BJ’s Brewhouse. BJ’s will donate 15% of their food sales from 11:00 – 9:00 that day to St. Baldrick’s for every flyer that is presented. Lauren’s brother, Mark, has a good friend who is on Team LaurenStrong. Brice will be shaving his head, along with two of his brothers, Chris and Parker. Parker is 14 years old and this will be his 7th time participating in St. Baldrick’s. Mark, dad, and I get to shave the three brothers’ hair that day. They have been growing their hair all year for this event. People can join Team LaurenStrong or start their own team for the event. See the attached page from St. Baldrick’s. http://www.stbaldricks.org/events/laurenstrong 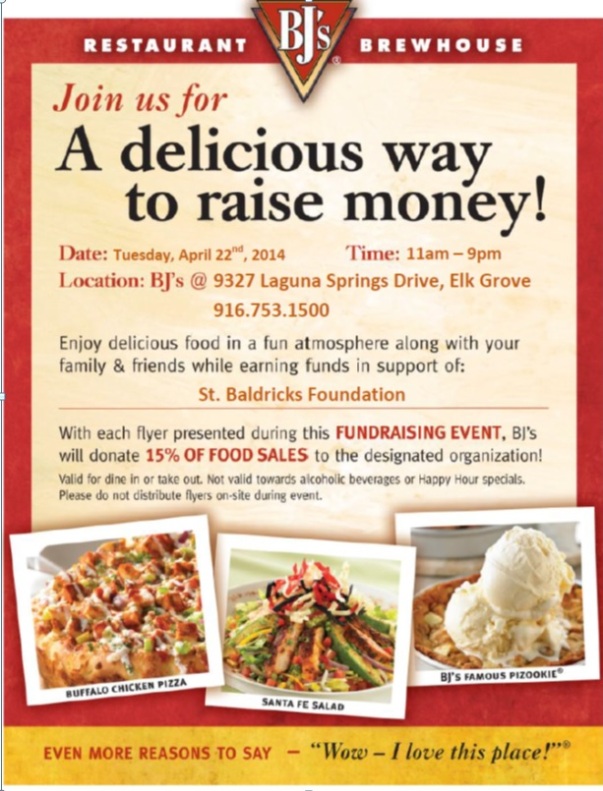 Bring the BJ’s flyer to the April 22nd St. Baldrick’s event to have 15% of food sales donated to St. Baldrick’s to support childhood cancer research.

Diablo Valley College will recognize Lauren at the school level, conference level, and the state level. Plans are in the early stages, but it is so awesome that they feel so strongly about honoring Lauren. She loved that school and it appears the school loved her back.  The DVC Swim Team created a large banner that is displayed at the pool for all to see.  It simply says, “We are LaurenStrong.”  They also presented the family with a special photo album/scrap book of the swim team and Lauren.  It touched our hearts.  Also, the DVC Lacrosse team will retire the #1 jersey that they presented Lauren with at a match in the Fall. 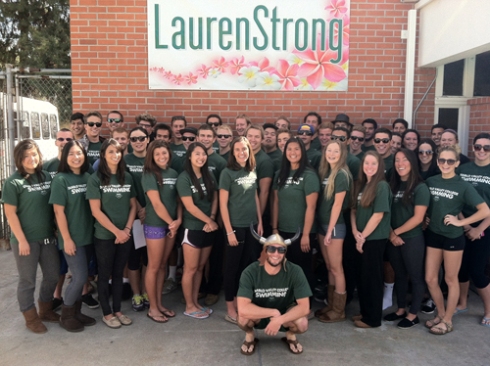 If anyone would like to continue to get the message out that children get cancer, please ask the government to support research efforts and find an event to participate in. Many people think, “It’s not my child.” Three years ago it wasn’t our child either. Cancer does not discriminate.

4 thoughts on “Lauren’s Celebration of Life and Her Legacy”