Today I woke up and was happy to see that my dad was still in the hospital. Turns out that he had taken the day off because he had some errands of some sort to run, but it meant that he could spend a little bit more time with me in the morning. I was expecting Eden to come at around 10 so I decided that I had to get ready a little bit earlier than I normally do. Eden came a little bit earlier than I had thought, so while I was washing my hair and body she went to hang out with the nurses until I was all nice and clean (in a hospital sense of clean). When I was done she came back to hang out with me and while my dad went to get breakfast downstairs. Eden always talks about how much she loves talking to me and just hanging out with me alone, because we have so much in common and we have shared our cancer experiences together. So while talking, my nurse Carole came in with a blonde mustache attached to her face. We immediately started laughing, and I had to get out the mustaches that Robyn handed me a few days earlier. Eden and I put on our blonde mustaches and joined the fun! We were taking pictures and videos when DeAngela came in, so she had to join in the action- although the blonde definitely was not her color. Eden’s stache was a thin one, kind of french looking if you asked me. My mustache looked like something a deputy would have, while DeAngela’s stache was one that matched with a sheriff’s.
When my EMTs came, Eden left and DeAngela and I kept our mustaches so we could surprise my awesome radiologists. I really liked the EMTs that I had today. They were extremely nice and had no problem whatsoever with taking DeAngela with them. In their own words, “She could even want to stop by McDonald’s and we wouldn’t care,” So they were already winners in my heart. They were three heavy set men with a sense of humor that I could enjoy. With one of them, DeAngela and I felt comfortable enough to have more adult conversations with, and we were all very open about everything and talked about random, funny subjects such as the concept of the teenage parents who refuse to believe that their kids might have sex and will not provide them with proper birth control to him sneaking into his college girlfriend’s room during Thanksgiving Break at a religious school and almost getting caught. This was by far the most fun I had while I was in the ambulance, and I guess it did not hurt that I was unattached to my IV pole the whole time. The ambulance driver was very considerate and took the long way to radiology because the short way is very bumpy and can cause stomach aches. This gave me a new view from the back of the ambulance that I hadn’t seen in all the other 8 times that I was taken to get radiation.

Radiation went smooth as usual, and the radiologists all appreciated the mustaches, so Dee and I took them off when we left. I invited all of my radiologists to my wedding because they have played a very important role in my life in the past two years.

When I got back, Eden, Ashleigh, and her mom visited my room and we talked for about thirty minutes, as Ashleigh had chemo that day and was in Ativan Land, so she was getting quite sleepy. I love being able to talk about the experiences that I have had during my battle with cancer and I love being able to give tips to people of what to take advantage of and what to stay away from. When they left Dee and I were alone for about twenty minutes until my old neighbor and girl I grew up with who is in the babysitting coop with me named Kelsey came by with beef teriyaki and rice for my lunch. She also brought by a gift from the kids of the babysitting coop. It was a star named after me. What a great way to leave behind part of my legacy than to have a star named after me? I thought it was really cute. Kelsey, DeAngela, and I were watching Identity Thief (which I was not very interested in and did not think was very good at all) when someone knocked on the door and it turned out to be one of my best friends from high school Eric and his mother. I had totally forgotten that he had asked to come by and that I was really excited to see him. Go figure, I will blame it on the chemo brain, even though I haven’t had chemo in about three weeks or so. But he came in bringing the most beautiful bouquet of flowers with plenty of roses- which smelled fantastic by the way. I was so glad that he came at the perfect moment, so I talked with him and his mom while Kelsey and DeAngela continued to watch the movie. I was so glad to be reunited with Eric since I had not seen him in quite a while, so we had a nice long embrace when we saw each other. His mom asked if there was anything food-wise that we needed for the wedding, and I answered honestly that we could use a few more small bites for the cocktail hour. She responded by saying that she could make 300 egg rolls, half with pork and half vegetarian. I was floored with her offer and quickly accepted, graciously of course. She then asked if we needed any fruit, and I responded again with a “yes”. She had the best idea of what to do with the fruit so I am going to keep that a little secret, but it was a cute idea. I was originally supposed to help her make it (well I offered to help so I could learn) and it turns out that the mother works during the day before the wedding and was planning on making the fruit fantasia during the evening of July 5th. However, I am going to be rehearsing for my wedding at that time, so I guess I will have to let her know what the new plan is. But nevertheless, I am incredibly excited for the whole wedding, if not a little nervous.

So at the end of the day I ended up being really emotional and kind of sad, because it was confirmed that the love Egor has for me is friendship love, and it will not bloom into the romantic love that I was really hoping for. I am glad that he has been honest about it during the whole time, but I still had a little hope. I started crying because I want to be in love at least once in my 20 years of living and it does not seem like that will happen, I will have to settle for true friendship love. And I am grateful that Egor is willing to marry me with all of the friendship love that he has for me. So unfortunately for me, we will not be consummating the wedding. That is another problem I will have to deal with. I have needs that all grown women at the age of 20 have- in fact every woman has them. This is me writing in my honest state of mind- I just want to be able to be touched and loved by a man (more of lust but I am a little embarrassed to write that).

I got a letter today from a family member today that really touched me and made me cry. This family member has been going through a tough time and has been thinking of giving up, but because of me he has hope again. Because I am still battling a battle that is most likely unwinnable, and he has a life that he can still live out even though things are hard. Hearing things like these are reinforcing some of the reasons why I try to write every night. I want to inspire people to never give up and to live their lives in the best way that they can. I want people to realize that their lives could be worse and that they should be thankful for their health. I want people to understand what I am going through in the most real way possible, mostly without censoring it to keep it as raw as possible. I want people to stop complaining about stupid boy problems, friend problems, family and money problems and to realize that life could be so much worse, and that no one likes people who complain constantly about stupid, little things. I want to inspire people not to give up on their lives.

And on one last note for the night, I get out of the hospital tomorrow and I also have my last radiation treatment tomorrow as well. I am elated to be going home and I cannot wait to be there to relax, spend time with my family, and of course, cuddle with my kitty for the longest time, as he is the only family member who I have not been able to see in the two weeks that I have been here. So yay to getting out of the hospital!!! 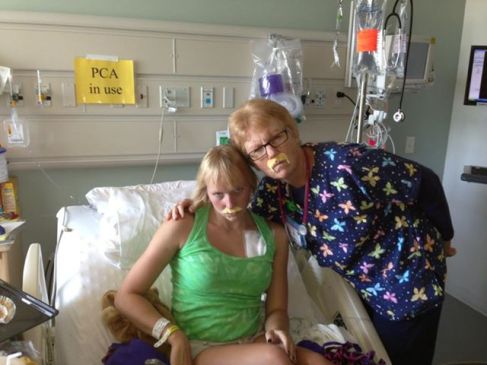 Carole and I rocking our mustaches. Thought you might enjoy this picture.